Stavriani Zervakakou is the Generation Best of the day. With studies in Balkan History and a postgraduate degree in International Relations, the executive chef of Annie's Fine Cooking in Neos Kosmos explains the reasons why she changes the card daily based on the fresh seasonal materials she finds in the popular markets and envisions reviving old and new ones.

Zervakakou Stavriani studied Balkan History at the Aristotle University of Thessaloniki and did postgraduate studies in International Relations with an emphasis on Greek-Turkish. She studied with a scholarship at the Istanbul Culinary Institute and since 2011 she has been working as a professional cook.

Her first job as a chef appeared in 2014-2016 at the restaurant Karaköy Gümrük and when she returned to Greece she took over the kitchen of the hotel Kirimai in Gerolimenas of Mesa Mani where she was awarded the Greek Cuisine Award by Athinorama in 2018 as well as the international Best Gourmet Award from the Historic Hotels of Europe by public vote.

Now she has taken over the kitchen of Annie Fine Cooking in Neos Kosmos, changing the card daily based on the fresh seasonal ingredients she finds in the popular markets and in her daily communication with Greek and Greek small producers, inspired by the local cuisines of Greece.

Her dream is to open her own restaurant in her hometown of Mani and to revive old grain and legume seeds in the area in close collaboration with scientists who will help her get to know in depth the eating habits of Mani. 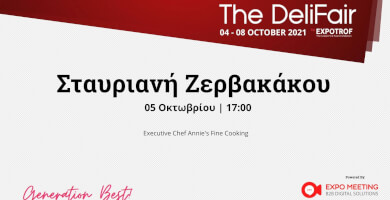 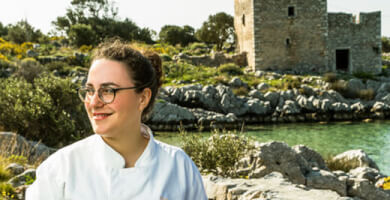 Download Presentation
© All rights reserved. Made by The DeliFair